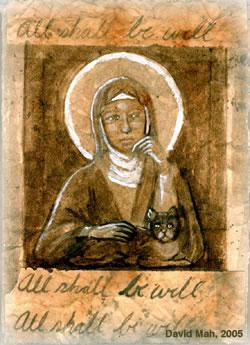 Born in 1342 into uncertain times – two plagues within twenty years, which halved the population of Norwich, and England in the middle of a thirty-year war with France. She was deeply religious and earnestly prayed for three things – an experience of the passion as if she had been there, a near death encounter at age thirty, and thirdly, the gift of three wounds, contrition, natural compassion and a longing for God. Whilst the three wounds were a constant prayer she seems to have let the other two go until they came to pass in the her thirty-first year.

In early 1373 she succumbed to an illness that took her near to death and having received the last rites all expected her to die. She remembered her requests for an experience of the passion and near death encounters and experienced two days of visionary encounters centred around the love of God as well as themes of redemption, God’s mercy and sin.

It is thought that after this experience that Julian withdrew to live as an anchoress in seclusion and prayer in two rooms attached to the main body of the church of St Julian in Norwich, with a maid to assist her. She had three windows in her room – one facing the street, in the commercial quarter of Norwich, where people could come to ask for her advice, one where she could look into the church when services were held and one where the maid brought food and water and took out the waste.

When I visited the church I was really impacted by the enduring presence of God in the small room she had lived in. Here was an unknown, illiterate woman who taught herself to read and write and who had amazing encounters with Father, Son and Holy Spirit over a two-day period. She divided these encounters into sixteen ‘Showings’ and spent the rest of her life, forty years or so, meditating, reflecting and writing in what some describe as a circular fashion, going ever deeper to discover more of the heart of God.

She was a contemporary of Chaucer and was the first woman to write a ‘book,’ a spiritual treatise, in the language of common people and is acknowledged as the “first lady” of written English – as significant to prose as Chaucer was to poetry.

Her spirituality and theology, deeply rooted in daily life and experiences, were counter-cultural with the church in a dire state and most people focussed on avoiding going to hell, the Inquisition and the stamping out of heresy in full flow. Her message was entirely positive focussing on God’s grace as she encountered the love of the Father through Jesus by the Hoy Spirit. This love is shown continually towards all He has made –

“In this vision he showed me a little thing, the size of a hazelnut, and it was round as a ball. I looked at it with the eye of my understanding and thought, “What may this be?” And it was generally answered thus: “It is all that is made.” I marvelled how it might last, for it seemed it might suddenly have sunk into nothing because of its littleness. And I was answered in my understanding, “It lasts and ever shall, because God loves it.” (Revelation 5)

And it was the reason for the Showings –

“From the time I first had these revelations I often longed to know what our Lord meant. More than fifteen years later I was given in response a spiritual understanding and was told: “Do you want to know what our Lord meant in all this? Know it well: Love was his meaning. Who showed it to you? Love. What did he show you? Love. Why did he show it to you? For love.” (Revelation 86)

I am inspired by her example, she followed where He led even though it was against the tide and denounced by the established church, sustained by the love of God.